People together with Goyang 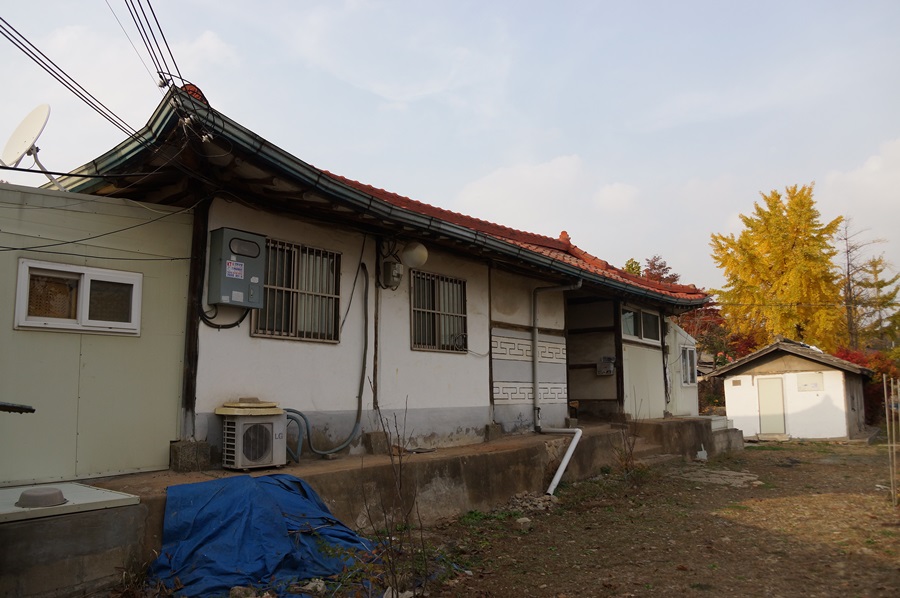 Birthplace of the general, Jangheung

Jangheung – Fighter for independence devoting the life for the country 1903 – 1983 Military police leader in China and fighter for independence for the country “If Joseon becomes independent upon my sacrifice,” Without the general, Jangheung, Joseon might not be able to take independence easily. General, Janghueng, devoted his entire life for the country. After the 3.1 movement, he worked for temporary government in China and took the battle with Japanese armies by leading military polies while greatly contributing to maintain the order. After Japan collapsed, he came to Korea and served as a role of the first military force leader in Korea. Therefore, he greatly contributed to maintain the order. As he devoted his life not for his interest but for the country, Jangheung represented a role model for those who only live for their profit or the power. 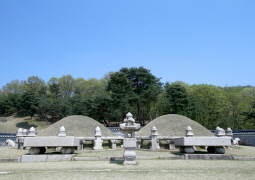 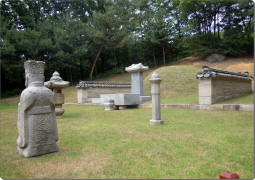 Heebin Chang (Jangokjung) (1659 – 1701 Royal concubine of Sukjong and birth mother of Gyungjong) “Is she the bad woman of the era? Or Is she the sacrifice of political war?” Heebin Chang is one of the characters that are the most frequently dealt with in the history drama as a wife of Sukjong. When she was young, she was in love with Sukjong that gave a birth to Gyungjong and became the queen. Afterwards, she ended up dying after drinking poison at the age of 42 due to political war. Many of the historians evaluated Heebin Chang as a woman who was not noble and pure but was not a bad woman at all in the history. Achievement of Heebin Chang must be considered as she spent her youth with Sukjong as one of the good and wise kings. How do you all think of Heebin Chang? Was she the bad woman in the history? Or was she the sacrifice of the political war? Woman from Goyang – Grandmother of meal

Grandmother of meal – Representative female army of justice in Goyang Unknown birth information. “Making an excuse makes a country collapse.” This idea for making an excuse all the times makes a world devastated. On the other hand, grandmother of meal had a belief that every little bit helped to protect the country if participating in the national salvation activities. She recruited housewives in the village making the troop and destroying the enemies near Hangju Fortress and cooked rice for poor citizens. In addition, she provided an opportunity for them to survive by distributing money and valuables. Her dedication provided a ripple effect that Korea destroyed Japanese soldiers. She is a great figure in the history that suggests much to those in modern era full of egoism. 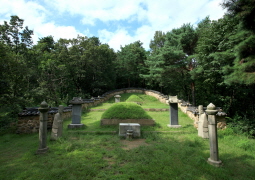 Young Choi – He was the symbol of transparency and also the last general in Koryo (1316 – 1388 Great genera in the late Koryo and loyal subject of Koryo royal family) General Young Choi is famous with phases,  “What would you bring if you die?” and ‘You need to stay away from materialism.’ He led wars for 80 times and ended up winning them all. Hence, he was awarded with many prizes. However, he always returned all the rewards back to the country as he was a loyal subject and great general. Until a moment before he died, many people were impressed with how transparent general Young Choi was and wished him to be a loyalist in Joseon. However, he said he was a man of Koryo and ended up facing death. He is a great figure in modern era where the value of transparency is lost. 8 figures in Goyang indicate those eight great men that are commemorated in Munbongseowon in Gobong-dong hey are Chugang Hyoon Nam, Sajae Junggook Kim, Bokjae Joon Ki, Chuman Jiwoon Chung, Haengchun Soon Min, Modang Leesang Hong, Suktan Sinu Lee, and Manhoi Yugyum Lee. They were loyal subjects that were much respected in Joseon Dynasty. Due to their sacrifice, Goyang has become a city where people want to live at. Suktan Sinui Lee (1551 – 1627): Civil servant in the middle of Joseon Dynasty serving Myunjong and Injo as a loyal subject. During the Japanese invasion, he took a troop with 300 soldiers and fought against Japanese armies. Afterwards, he supported military power to the siege of Hangju contributing to win the Japanese invasion war. The memorial of military army of justice in Goyang, Suktan Sinui Lee, is a unique exhibition hall that is located at Daerael village in Heungdo-dong, Deokyang-gu, Goyang-si. Located between Daeraeul village and IKEA, this place is a space that is used for the park, historical relics, cultural remains, and education. This exhibition hall is constructed and operated by the public without support of government or organizations. This hall is also comprised of shrine made of Korean traditional house, exhibition hall, and Yangsodang building. Exhibition hall of Suktan Sinui Lee was constructed in 2014 by descendants to memorize the achievement and life of Suktan Sinui Lee who was the military of justice, scholar, politician, and writer. He is one of the eight figures in Goyang and also a character that is chosen for national salvation activity in Gyeonggi-do as a person from Goyang. In addition, his tomb, Sindo tombstone, and Jangdae tombstone (將臺碑) are all designated as regional cultural asset in Goyang-si. This is a rare case where descendants spent tens of hundred millions KRW to construct and operate the exhibition hall. 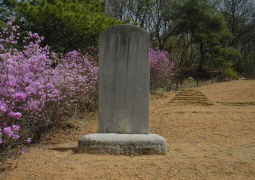 8 figures in Goyang indicate those eight great men that are commemorated in Munbongseowon in Gobong-dong. They are Chugang Hyoon Nam, Sajae Junggook Kim, Bokjae Joon Ki, Chuman Jiwoon Chung, Haengchun Soon Min, Modang Leesang Hong, Suktan Sinu Lee, and Manhoi Yugyum Lee. They were loyal subjects that were much respected in Joseon Dynasty. Due to their sacrifice, Goyang has become a city where people want to live at. Haengchun Minsoon (1591 – 1591): Minsoon was a scholar in the middle of Joseon and followed the path of classical scholar to say the right words. He was appointed in the high level position in the government office but receded from it as he could not pursue his studies. Thereafter, he focused on the education for descendants and research on the studies at Hyangri. 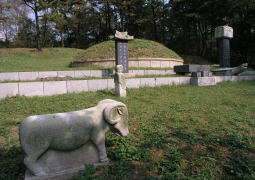 8 figures in Goyang indicate those eight great men that are commemorated in Munbongseowon in Gobong-dong. They are Chugang Hyoon Nam, Sajae Junggook Kim, Bokjae Joon Ki, Chuman Jiwoon Chung, Haengchun Soon Min, Modang Leesang Hong, Suktan Sinu Lee, and Manhoi Yugyum Lee. They were loyal subjects that were much respected in Joseon Dynasty. Due to their sacrifice, Goyang has become a city where people want to live at. Bokjae Joon Ki (1492 – 1521): Joon Ki was a figure who made an effort to create a new society by eradicating old politics in Joseon Dynasty with Gwangjo Cho. However, due to the Gimyosahwa, he was exiled and killed by others thereafter. If he would have led the revolution in Joseon Dynasty with Gwangjo Cho, the history of Joseon would have been changed 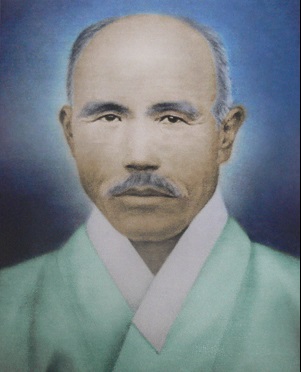 Yanggok Gasoon Lee developed independence movement in Manchuria and the Maritime Province since he was a juvenile. In 1919, he belonged to Wonsan Gamri Church but led 3.1 Independence Movement and established Daesung School and Singanhoi Wonsan committee in Wonsan. Afterwards, he became a leader of independence movement and was sent to prison. Then, he moved to Goyang-gun. After he moved to Goyang-gun, he realized that the land in Jido-myeon, Goyang-gun, had no bank but only had fields of reeds and mud flat that were weak against the drought as if it was a wasteland. Therefore, Gasoon Lee purchased the land near the area at his personal expense and developed irrigation business and water irritation facilities. However, while he led the irritation business, he passed away in 1943. In addition, his son, Wonjae Lee, established Goyang-gun Water Irritation Association. On November, 2010, Gasoon Lee was selected as a proud figure in Goyang that commemorated the achievements of Gasoon Lee and Wonjae Lee. On the other hand, Songduk tombstone of Gasoon Lee in the pumping station that the access by the public was limited in Goyang-si was relocated to Hangju Fortress History Park where many of the citizens are now able to see it. 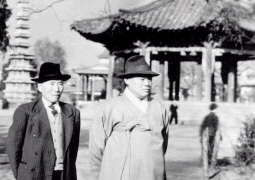 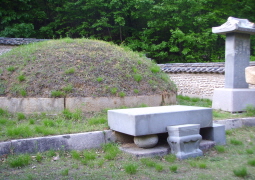 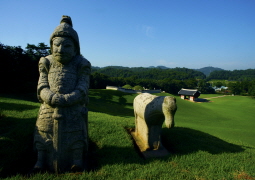 Sukjong – King who loved Goyang and wanted to be a person of Goyang. 1661-1720. 19th national king in Joseon. “If the king Sukong did not love Goyang, there must not be Goyang-si today.” The 19th national king in Joseon, Sukjong, ended up knowing that Goyang was the perfect location according to topography. Therefore, he built Bunhansan Fortress and wished to live with citizens there. After he passed away, he loved Goyang so much that he is currently served at Seoreung Tomb in Goyang.