Cultural heritage encountered on the street | Gongreung Riverside, A good place to walk 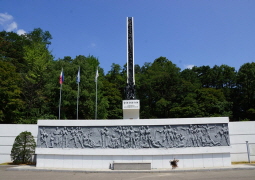 This monument is located at Gwansan-dong, Deokyang-gu, Tongilro. Due to the invasion from North Korea on June 25, 1950, Philippine armies participated in the war on September 19, 1950, achieving many of the accomplishments. Therefore, this monument was established to comfort the spirits of them and commemorate their accomplishment for their descendants. Images and facial expressions of 50 soldiers engraved on the monument show how our citizens pursue the freedom and peace out of the fear and desperation. The relieve on the front of monument expresses the folk culture in Philippine. Designation number: Cultural asset number 79 location: 427 Sinwon-dong, Deokyang-gu, Goyang-si Wolsandaegun shrine is located near Woldandaegun tomb. This shrine (Seokgwangsa) is located to the north and west of Wolsandaegun tomb. It was firstly constructed on April, 1756, and the current building was constructed in the 10th year in the reign of Jungjo (1786). Three gates were constructed in the middle of square fence, and shrine was constructed in it. In a rare case as a personal shrine, rectangular stone was used for the construction along with the drainage system in stone. Why have so many rectangular stones been used in the shrine? This is because there were many rectangular stones. Before this shrine was established, it was assumed that there was a temple for commemorating Wolsandaegun between his tomb and shrine. This place was called as Heungboksa. When visiting the field, ther are many of the Gisan stones. Many of the rectangular stones used in this place were also utilized as supplementary materials for Wolsandaegun shrine. Rectangular stones that were supposed to be used such as the floor or fence in shrine were actually used. Temple is relatively huge, but the size has been significantly reduced to construct the shrine. Shrine has the Mindori Matbaegiwa in 3 columns and 3 rooms. Front side of the building has one column opened for the events in financial worlds. Tablet of ‘錫光祠’ was granted by the king Youngjo. This place is located about 1km away from Nakta hill to the Uijeong-bu from Goyang city hall at Sinwon-dong, Deokyang-gu. This place is called as Songgang Village as the Songgang Jungchul, a writer, poet, and politician in the middle of Joseon Dynasty stayed. In Songgang Village, there are the tomb for Songgang Jungchul , tombs of his parents, place where he fished, and Simyosal as well as the literature hall of Songgang. In addition, There is a tome of Ganga who loved Songgang. On the park near the entrance of village, there are memorial stones recording his life and how he lived in Sinwon village.