Wishing for the peace

Dokdo, special law for victim of Comfort Women, and Silicon Valley are the issues to be solved with all of our attention. 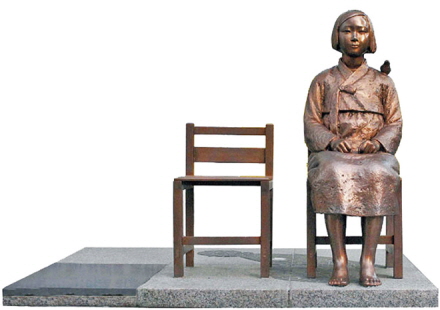 We are asking victims of Comfort Women on the signature movement for Nobel Prize!

We are asking victims of Comfort Women on the signature movement for Nobel Prize!   Goyang-si has been making various efforts to solve an issue of legal compensation and restoration of rights of victims from Comfort Women since August, 2012, and grandmothers have continuously made efforts and contributions for the human rights and peace through the demonstration on Wednesday for 1,300 times.   We are about to suggest a solution to solve historical conflicts between Korea and Japan by suggesting candidates for the Nobel Peace Prize and international peace human rights reward among 37 victims from Comfort Women.   We are asking all of you to participate in the signature movement so that candidates of Nobel Peace Prize and International peace human rights are successfully suggested.   ■ Signature page for the suggestion of candidates of victims from Comfort Women for Nobel Peace Prize:  - Signature page : http://www.goyang.go.kr/kr/community/sub10/01/ International society or international human right committee have regulated the issue of ‘sexual harassment’ victims forced to serve Japanese soldiers as a crime of war and been asking Japan to apologize officially. Issues of victims of ‘sexual harassment’ forced to serve Japanese soldiers has been revealed to the entire world as it was issued by the women community in Korea in the 1980s and also actively participated by women communities and human right groups in all over the world. Movement for solving an issue of victims of ‘sexual harassment’ of Japanese soldiers was an international civil movement deployed by cooperation beyond the social classes, genders, and nationalities. It is to prevent the re-occurrence of infringement on human rights on women by clarifying who to blame for the crime of war and penalizing them. The issue of ‘sexual harassment’ forced by Japanese soldiers as the most devastated crime of war in the history of mankind shall be dealt with by Japan with official apology and solved in the following principles First of all, the issue shall be solved when victims are alive. Japanese government has denied the existence of ‘Comfort Women’ back in the 1980s. As the specific documents of Japanese soldiers along with the testimony of victims and participatory soldiers, Japan ended up acknowledging the fact that Comfort Women existed. However, they are still denying the involvement and forceful mobilization of Comfort Women. Secondly, distorted human rights shall be restored while penalizing the crime of war. What is important besides the infringement of human rights of victims is how the history is being distorted and hidden. Restoring the history is required for the human rights of victims. Third, it is required to reinforce history and human right education. Issue of ‘sex slavery’ by Japanese soldiers is the sad history of women as well as the painful memory of Korea starting from when Korea was dominated by Japan. It is required to setup a day for praying for victims in the nation and provide education for human rights and history. Fourth, it is required to operate an international advisory group for consultation with Japan. Victims have been taking a leading role through various activities. However, there was no solution, and Japan strongly denied ‘sex slavery.’ Victims do not have much time. It is required to create a third international human right organization that can serve Korean government, Japanese government, and victims and start negotiating with Japan. Fifth, it is required to proceed joint investigation and make a textbook commonly used by Korea and Japan.  There has not been joint investigation by Korean and Japanese government so far. The number of victims is estimated to be about 2 hundred thousand according to the testimony of victims and limited resources at that time. It is required to open the data from Japanese government-general of Korea possessed by Japanese government and reveal who were forced to the Japanese military camp and how they were forcefully taken in terms of the exact number of victim. 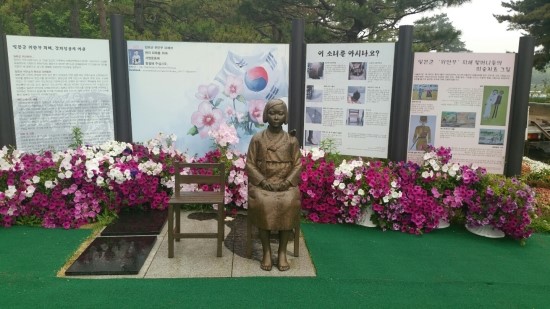 Honor and human rights to grandmothers Reward of girl of peace ‘Do you know this girl?’

In the 1000th time (December 14, 2011) of assembly on Wednesday by grandmothers who were victims of Comfort Women from Japanese soldiers, this is the reward of girls of peace that was made to wish for official apology and legal compensation from Japanese government.  In Goyang-si, it was installed in front of Goyang 600 year’s anniversary museum with wish from a million citizens on May, 2003.  Then, it was relocated to Ilsan Cultural Plaza in front of Ilsandong Gu-Office on February, 2016. 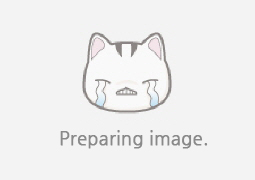 Goyang-si juvenile consultation welfare center visiting juveniles! – Based on ‘1388 juvenile reporter groups on the 11th’ Goyang-si juvenile consultation welfare center has revealed that they out-reached juveniles at Ilsan Cultural Plaza on the 11th. ‘Outreach’ activities are a part of ‘consultation’ provided from outside for finding juveniles under risk in advance, providing supporting service for juveniles, and patrolling the environment concentrated with juveniles. This outreach activity was done by ‘1388 juvenile reporter’ student groups proceeding the advertising outreach activity with various services from Goyang-si juvenile consultation welfare center, telephone service for juveniles named 1388, and recruitment of 21st generation of juvenile reporter groups. Survey was also conducted with the theme of donation. According to the result of survey about donating means with donators, they turned out to be in an order of donation of money (56.3%), participation in making a hat for newly born babies (23.2%), purchase of donating bracelet (17.7%), and talent donation (2.8%). As for the donating bracelet, they turned out to be in an order of Hium spirit bracelet ‘Comfort Women bracelet (33.5%),’ ‘Befriend bracelet ‘poorly-fed children supporting bracelet (27.8%),’ ‘New Kit endangered animal bracelet (19.9%),’ and ‘With ice bracelet ‘donation for students suffering from Lou Gherig’s disease (18.8%).’ A student from ‘1388 juvenile reporter groups’ who participated in the activities said, “I was able to advertise the ‘1388 juvenile reporter groups through this activity and was satisfied with the high response rate of survey made by us.’ On the other hand, Goyang-si juvenile consultation welfare center is about to perform outreach for 10 times a year by visiting the area concentrated with juveniles in cooperation with police station near the area and juvenile organizations. provided by Children Juvenile Department (Director: Jieun Kim, 8075-2288, Team leader: Bonggy Shin, 8075- 2285)