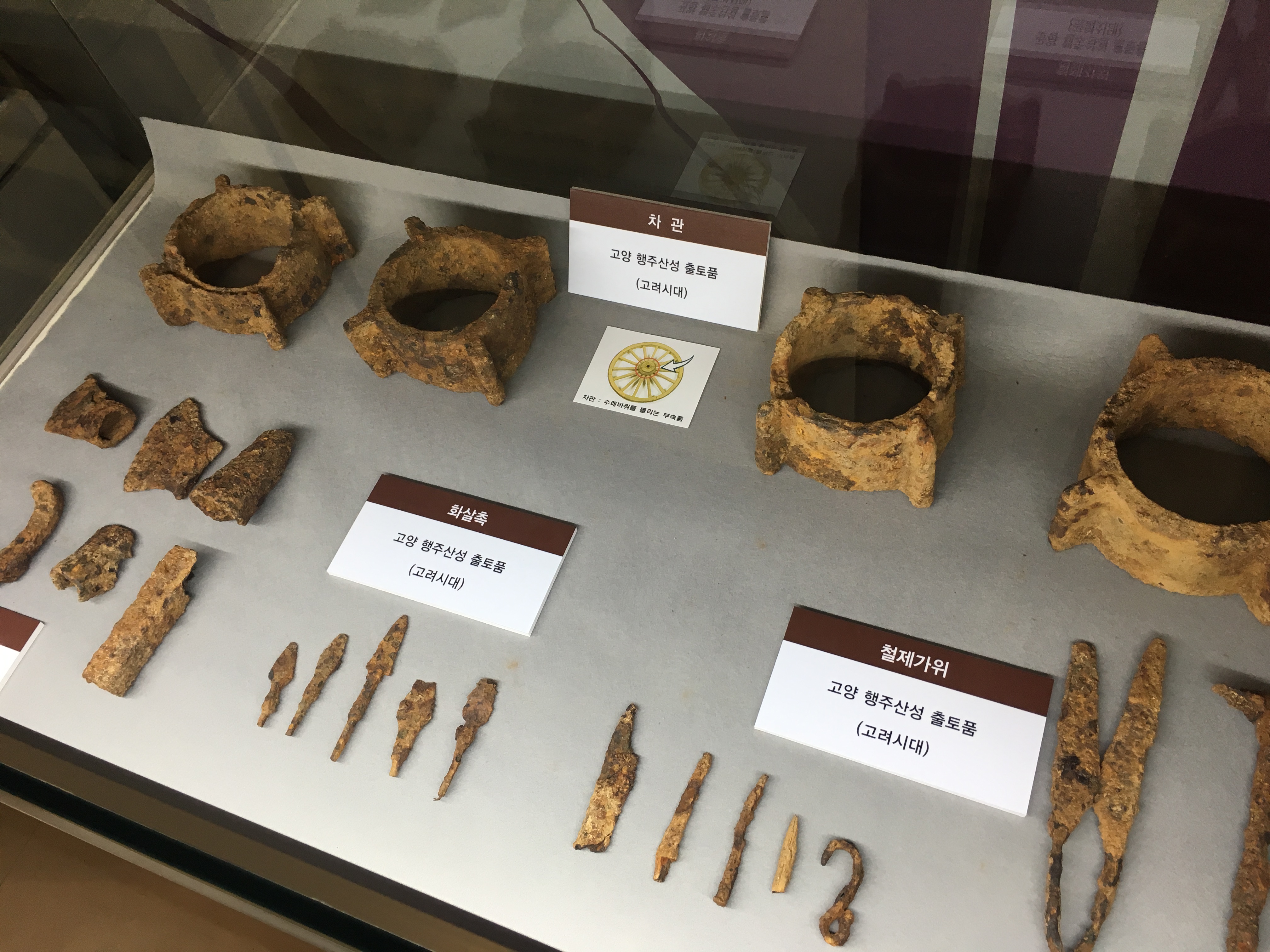 Stone castle was found at Hangju Fortress on April, 2017

On April, 2017, stone castle was found at Hangju Fortress as a representative cultural historical site in Goyang-si rewriting the history of Goyang-si. In the meanwhile, Hangju Fortress was known to be made out of dirt during unified Shilla period. However, with this stone castle, it was confirmed to be stone-made castle along with earthen rampart and stone castle during the period of Three States. Relics were found with the stone castle. Experts assume that they are the relics from the period of Three States according to the earthenware patterns and construction method of the castle. During the Goyang Flower Exhibition in 2017, there was a special exhibition at Goyang 600 Years memorial hall. With this excavating inspection, it was confirmed that there was a stone castle with the maximum height of 6m at Hangju Fortress about one thousand years ago. There were relics from the period of Three States and Koryo found along with stone castle in Hangju Fortress on March. As they were excavated in the course of academic investigation for ‘overall plan for maintenance of Hangju Fortress’ proceed in Goyang-si, parts of the wheels, teakettles, scissors, arrow heads, and other stone relics such as iron, and roof tiles in the shape of 幸 and earthenwares were found. It is expected to be a turning point to change the perspective about Goyang Hangju Fortress that was previously recognized as a place for winning Japanese invasion war in the past through the relics in sites for maintenance of Hangju Fortress in Goyang. In addition, stone castles found in Hangju Fortress known to be a earthen rampart are now of an issue in the history of Korea. 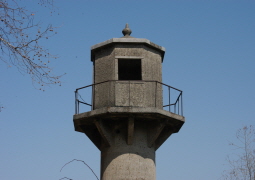 Hangju water level observatory is the facility constructed to observe the water level of Han River at Haengju-dong, Deokyang-gu in the 1930s. Officlal observation ended in 1979. The first year when observation started was 1916. However, observatory was constructed in the 1930s while installing the 浮子 自己水位計 to make it feasible to more accurately observe. According to the <Joseon River Report> issued by Governor General of Korea in 1929, various situations at that time were recorded providing a detailed circumstance when it was constructed. This observatory is important as a relic related to the water gate and river construction in the Japanese colonial era and also a meaningful resource for representing construction methods and skills at that time. It has been designated as the cultural asset number 599 registered in Gyeonggi-do. 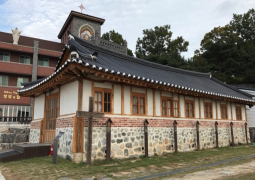 Hangju church is the Korean traditional house church established in 1910. As it was relocated to the current location in 1928, most of the supplementary materials used at that time including the wooden materials were used. As it was extended in 1949, records at that timte were well-preserveed showing the historical features. Afterwards, the dissembling and restoring construction of Hangju church was completed as a government-led business on December 2, 2015. Hangju lecture hall is located at about 400m to Han River from the front door of fortress and to the west of Hangju Fortress. During the reign of the king Hun in the late Joseon Dynasty, there was no place for the ritual ceremony for the general Yul Kwon theat shrine was constructed in the 7th year of the king Hun (1841). It was called as 紀功祠 as an origin of Hangju lecture hall. Afterwards, shrine for orienting the general Yuk Kwon was preserved educating younger students. The place had a fense in the size with length of 18m and width of 20m and was recently restored. To the back of inner side, there is a stonework on the relatively high site. Below the stoneworks, there is a building that was used as a lecture hall. Hangju lecture hall is serving the general Yul Kwon as well as Sungui, Kyung Cho, Bin Lee, Gul Chung, Young Chu, and Ijung Byun, and ritual ceremony is held in this place in spring and fall. 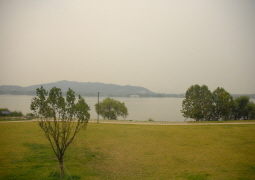 Hangju Fortress historical park is located near Han River at Hangjuui-dong, Deokyang-gu, in Goyang-si. This place was originally used to prevent invasion from armed soldiers from North Korea in the 1970s with barbed-wire fence. In addition, military army resided near the park and Sijung training center. Afterwards, business for demolishing the areas was proceeded in 2010 that the current Hangju Fortress historical park was built. There are memorial stones of historical figures in Goyang including Chugang, Hyoon Nam, Seokju, Pil Kwon, and Seoktan Siui Lee in the historical park along with the barbed-wire fences and messages for the peace and Sijung training center. In addition, there are many types of plants, observatory of Han River, Korean anchovy ships, and statement by the independence fighter, Changho Ahn, in the Waterside Park towards Han River. Hangju Fortress historical park has been constructed in reference to the 杏湖觀漁圖 drawn by Gyumjae Jungsun as an artist in the late Joseon Dynasty in 1741.

This is the fortress constructed along the ridge of Dukyang Mountain as the 56th historical site with altitude of 124.8m from the sea water level. Fortress wall has been partially constructed along the ridge in 70 to 100 from the sea water level. The length of it is about 1km. To the south of fortress, there is Han River. To the north and south, Changreungcheon surrounds the fortress flowing into Han River. Therefore, moat has been established. To the east/south and south from the fortress, there is a ramp equipped with geographical conditions as a fortress. On the peak of the mountain, it is possible to see the view of road towards the north. In the Hangju Fortress, there is the memorial stone of siege of Hangju built in 1602 and the Chungjangsa serving the tablet of the general Yul Kwon. In the siege exhibition hall where relics are displayed, there are wagons, newly-cultivated rice field, and gun containers, and the Hangju Siege Festival is held on March 14th every year in Goyang-si. 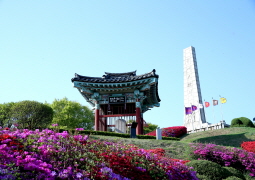 History and record of the siege of Hangu, Hangju Siege memorial stone

Hangju siege memorial stone is located on Deokyang Mountain where there is Hangju Fortress as one of the three places of sieges during the Japanese invasion. Old Hangu Siege memorial stone preserved in the monument house as it was designated as the cultural asset was built in 1602. Hangju siege memorial stone has been written with the major courses and meaning of siege of Hangju along with the soldiers who participated in the battle. Therefore, it is historically important relic. Due to the wind and rain, it is difficult to see the writings, but it was built with soldiers led by the general Yul Kwon who conquered the siege of Hangju. According ot this memorial stone, it is available to identify the details about the siege of Hangju, and the statement was made by Hangbok Lee who was famous for five stars and written by the famous Seokbong Lee. 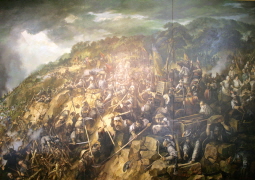 Three major sieges during the Japanese invasion, Seige of Hangju

On July, 592 (25th year of Sunjo), the general Yul Kwon conquered the Japanese troop led by Kobayaki at Ichi in Geumsan-gun and became the governor of Jeolla-do. Afterwards, he joined army from Ming Dynasty conquering Japanese soldiers at Dokwan Fortrress in Suwon while going to recapture Seoul. In February, 1593, he moved his turf to the Hangju Fortress about 7km away to the west of Seoul. In this place, total size of the turf was about 3000 soldiers as Uiseong troop led by Chuyoung joined to the army of the general Yul Kwon. They were armed with freight car that was made by Ijung Byun and 水車石砲 other than arrows, knives, and spear and prepared for the battle by holding the pocket with ashes. Japanese soldiers were led in division by Goshini, Ishida, Guroda, and Yoshigawa in seven troops for the total size of 20 thousand soldiers under the control of general Ukita surrounding and attacking the fortress in the morning on February 12, 1593. Soldiers and Uiseong troops in the fortress used freight cars, 水車石砲, Jincheonroi, and narrow gun to fight back, and the general Yul Kwon provided water to soldiers for promoting their spirit. After they ran out of arrows, they threw pockets with ashes and stones, and all the men and women from the fortress or private sectors participated in the battle. Even housewives cut their skirts in short moving stones to catapult and helping soldiers.  At that time, Gyeonggi governor Bin Lee and Chungcheong governor Gul Chung brought arrows going across Han River and attemping to attack the back areas of Japanese soldiers. Severely damaged Japanese soldiers started running away by burning the bodies around. Soldies from the fortress chased after running Japanese soldiers killing 130 of them and damaging generals such as Ukita, Yoshida, and Yoshigawa while acquiring many of the war supplies such as armor, spear, and knives. This is the one of the famous battles during the Japanese invasion, the Siege of Hangju. 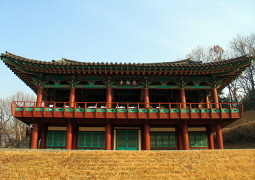 Hangju Fortress – Chunghunjeong Chungjunjeong is two-story Korean traditional house located on the right side of entrance at Hangju Fortress and is used as an archery field. In this building, many of the traditional archery experience events are held. 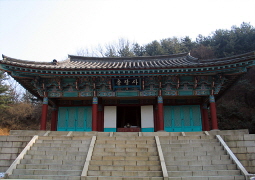 Chungjangsa is the temple serving Dowonsu in the Hangju Fortress through sacrificial rite. Sacrificial rites including the Hangju culture festival are held on March 14 every year. Jeonsacheong is used for the change and also preserving traditional uniform. In the Hangju Siege Festival, sacrificial rite is performed only in this place according to the Jeryeak. 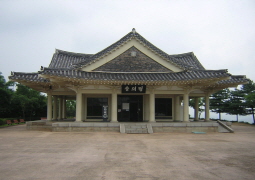 Chunguijeong is one of the Korean traditional pavilions located at the top of Hangju Fortress. This place is currently used as a room for projecting images for education and provides outstanding view with Bukhansan Mountain and Han River near the building.