In Beautiful Goyang-si, there are people who are designated as cultural property for their artistic value 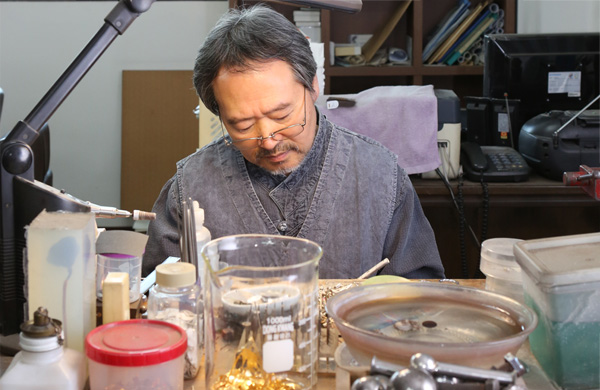 Gold and silver masters (金銀匠) are literally those who master the skills in gold and silver work to create decorations by using gold and silver. Started to be developed in the period of Three States, they have been succeeding the gold and silver work skills through Joseon Dynasty. Those masters in Joseon Dynasty delivered handiworks to the government office as they belonged to the country. However, as dynasties disappeared in Joseon, those masters gathered in the area near Gwanggyo River. They opened 銀房都家 to create kettle, vase, Korean traditional hairpin, twin rings, bells, and Korean traditional ornaments to continue their skills. Afterwards, they have been maintaining the gold and silver skills as a part of our tradition through 李王職美術品製作所. 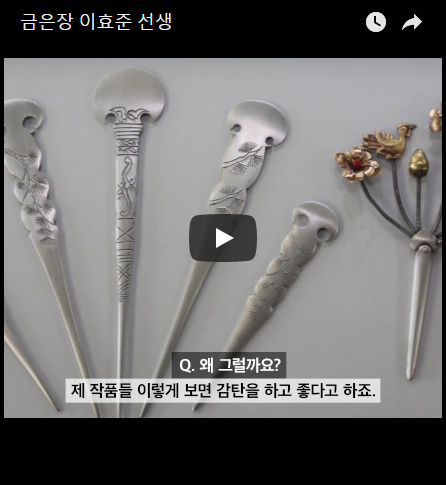 When did you start this work?

Who did you learn your skills from when you firstly started your career in gold and silver work?

He was the late artist Sunik Lee. It has been a long time. He is no longer working and has already passed away. I started learning from him at Yeji-dong in Jongro. When did you come to the field of art.. It was about the 1980s.

When did you come to the field of art..

How old were you when you firstly started working?

Are you only specializing in gold and silver work since then??

In short, how do you describe the gold and silver work field?

In short, if I compare with item types, gold and silver masters are those who make the Korean traditional ornaments, hairpin, or other accessories for women.

However, there are still many areas beyond them. We need to make them all as well.

Therefore, it is difficulty to easily define who gold and silver masters are. They all need to be able to master them all.

What I do has a relatively broader range. As it has broader range, I want to say I specialize in this one specific item, but I cannot.

Accessory made of gold and silver

Well, according to my opinion, they have a bit of higher level of appreciation.

They are impressed by my work.

Then, how long does it take to make Korean traditional hairpin?

Well, it depends on what I make. There are items that require at least 8 hours. I cannot say one specific time that is required to make all different items.

Was there any work that took you so long or that was specifically complicated?

Yes, there are the simple ones such as Korean traditional ornaments.There are complicated ones.

Well, there it is. Items such as Sipjangsaeng Korean traditional ornament. These items are all made by attaching the gold and craving them apart as a piece. So, it took me a long time.

Working on the piece

There were many of the rewards and commendation. How did you win them?

Is there any other reason? We need to work hard and survive.

We work hard, and our works are being released. This is how it works.

How do you think of cultivating disciples?

Yes, my son is my assistant to hand down the skills and maintain his position in the same field with me.

Is your son specialized in crafts?

Yes, he majored in metal crafts and is working with me now.

Well, it is fun. If not, we are not supposed to work on them

You feel rewarded and reassured?

What are you feeling to be rewarded the most as you do this type of work?

Well, people visit us often to see our works.

This is how thankful I am on them.

On February 07, 2005, Hyojun Lee was designated as the 43th intangible cultural property in Gyeonggido for his gold & silver craftmanshipHyojun Lee is one of the Goyang-si's true tresure