Bukhan Mountain and its cultural assets, precious culture space where we can feel the culture of late Joseon Dynasty culture

Korea, surrounded by mountains on three sides, has lots of famous mountains from old times. Among them, there are beautiful places incomparable to global attractions. Especially, Bukhan Mountain has remarkable magnificent view as well as various cultural assets, so it can be considered as one treasure as it is. Cultural assets located in various places in Bukhan Mountain are indescribable for their gorgeous view being harmonized with nature such as mountaintop and valley. In addition, the historical and cultural meaning are sufficient to be registered as world heritage. 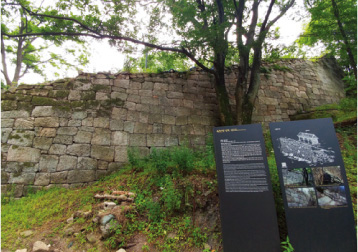 The fortress where the original forms are well preserved 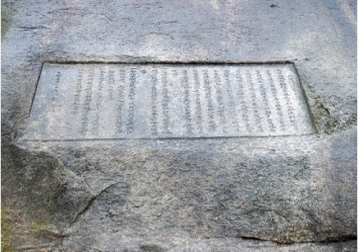 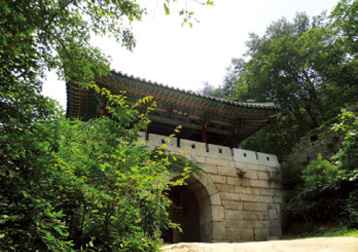 This is the castle filled with political and military volition of King Sukjong. As the final bastion to keep the castle town by royal family and people together, they constructed Bukhansanseong Fortress. They completed the fortress in 11.6km only in 6 months and it was military base to defend Hanyang together with Tangchoondaeseong, connecting Hanyang downtown and Bukhansanseong. It was the sightseeing place where several writers such as Choosa Kim Jeong-Hee, Dasan Jeong Yak-Yong and Lee Deok-Moo visited often.

16 gates in Bukhan Mountain|When you click 16 gates, you can see the details.

Seoammun(West secret gate)
It is located between Wonhyobong and Sumun and it was called as ‘Sigumun‘ meaning the door where corpses go out of castle. It took the shape of half circle but it is peculiar that rectangular stone was trimmed up round. Considering that it is vulnerable are for defense, the castle wall was constructed and exserted in ‘ㄱ‘ shape.

Sumun(water gate)
Sumun, constructed in the valley between Daeseomun and Seoammun, is located in the lowest position in Bukhansanseong. We can presume its scale due to castle wall connected in left and right and neighboring big stone has ‘Sugupaejang’ square stone

Bukmun
Bukmun is located between Wonhyobong and Youngchwibong in northern part of Bukhansanseong. Gate tower is missing long time ago and this is the only gate whose gate tower was not restored.

Daeseomun
Daeseomun is located in low west area. In both sides of Hongyemune, water drainage facilities were installed one by one. This holes were decorated in the shape of animal‘s face and raised its dignity.

Jungseongsumun
It was built beside Jungseonmun in 1714. But, it seems that it had been collapsed in 30 years because we cannot see the image of Sumun in 『Bukhanji』 published in 1745. There are traces of constituting like stairs by cutting big stone in tiers in order to secure the ground to accumulate Sumun castle wall.

Jungseongammun(Sigumun)
This is Ammun side-by-side to Jungseongmun and it was called as ‘Sigumun’ meaning the door where corpses go out of castle.

Buwangdongammun
It is located between Jeungchwibong and Nawolbong and it was called as Wongakmun because it is located near Wongaksa temple in the past. This is the largest scale among Ammuns in the fortress. Differently from other Ammuns, exterior wall is built in half circle shape and internal wall is built in square shape.

Yongammunammun
It is located between Yongambong and Ilchulbong and upper part of Yongammun was recently reconstructed.

Cheongsudongammun
It is located between Munsubong and Nahanbong. It was installed in order to control the street to inside of fortress from Tangchundaeseong and Bibong.

Daenammun
It is located between Munsubong and Nahanbong. It was installed in order to control the street to inside of fortress from Tangchundaeseong and Bibong.

Daeseongmun
Daeseongmun is located between Bogukmun and Daenammun. It is the largest scale gate and the closest street connecting castle town and temporary palace and it seems that this big gate was installed in order that the King may pass through it. 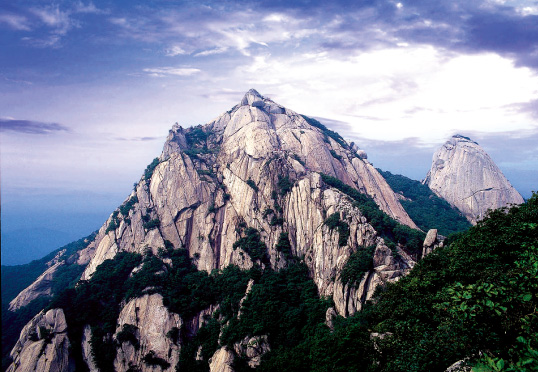 Bukhan Mountain and Samgak Mountain all mean same place. Bukhan Mountain means a mountain located in the northern area of Han River from the viewpoint of Baekje and Shilla contended for Han River basin and Joseon Dynasty which set up the capital in Hanyang. On the other hand, Samgak Mountain was used a lot in Koryo Dynasty. It was because 3 mountaintops, Mangyeongdae, Insubong and Baekwoondae, stood out when seeing south from Gaegyeong, the capital of Koryo.

What is the origin of Biseok(Tombstone) Street?

In front of Sanyoungroo near Yonghaksa Temple, there are many tombstones in line. These were monument to applaud officers managing Chongyungcheong, the government office within Bukhansanseong. We call it Biseok Street or applaud monument groups due to several tombstones.

After fierce battle for Han River basin in the period of the Three Kingdoms, finally Shilla Dynasty could occupy the area. King Jinheung examined new territory and set up a tombstone in Bukhan Mountain, which is ‘Bukhan Mountain Sunsubi Monument‘. It was a state of total neglect for a long time, but Choosa Kim Jeong-Hee informed its existence and it was called as ‘Bibong‘ meaning a mountaintop with monument. Currently, it is kept in National Museum of Korea in order to prevent damage.

It was called as Hachang because it is located in the lowest place among several warehouses. According to 「Bukhanji」, it is told that located in Seomunan(inside of Daeseomun). It is estimated that the place where Bukhan-dong History Museum is located is the site of former Hachang. There were 7 warehouses and one warehouse(Pyungchang) outside. Current Pyeongchang-dong is originated from here.

Korea, surrounded by mountains on three sides, has lots of famous mountains from old times. Among them, there are beautiful places incomparable to global attractions. Especially, Bukhan Mountain has remarkable magnificent view as well as various cultural assets, so it can be considered as one treasure as it is. Cultural assets located in various places in Bukhan Mountain are indescribable for their gorgeous view being harmonized with nature such as mountaintop and valley. In addition, the historical and cultural meaning are sufficient to be registered as world heritage.

While walking along Daeseomun castle road, we can find ‘Mooryangsa Temple‘ where queen of King Gojong, Mrs. Uhm, gave birth to King Youngchin. Mooryangsa Temple has its own meaning, but also many climbers visit Mooryangsa Temple because they can see Baekwoondae, Mangyeongdae and Insubong, so-called ‘Samgak Mountain‘, at a look. Deokamsa Temple, located in north of Mooryangsa Temple, is also a spectacle not to be missed. This temple is not so big, but there are many things to see such as ‘Wooden seated Bodhisattva statue‘ and Seokguram Grotto manufactured in the middle and late 17th century and the way to get there is quiet and still, so it is good to care your mind.

After passing Mooryangsa Temple and Deokamsa Temple, we can reach Wonhyobong. Wonhyobong is one of the most loved places by climbers in Bukhan Mountain and especially it shows its magnificent view when it snowed a lot. In order to go to Sangwoonsa Temple, where people who visit Wonhyobong also naturally visit, people have to pass North gate of Bukhansanseong. Both sides of north gate of Bukhansanseong, the trees are forested and the upper side of arch is covered with vines and it makes us feel the fragrance of old castle.

Sangwoonsa Temple is located in the southern part of Wonhyobong and it was constructed in order to defend the country when building Bukhansanseong, and the landscape of Mangyeongdae and Nojeokbong watching from Sangwoonsa Temple catches many people‘s eyes. Especially, it is told that Sangwoonsa Temple with crimson maple in autumn comes to the climax of its beauty. Borisa Temple, located in the corner before Sangwoonsa Temple, is famous for juniper, so-called ‘Hachang Tree‘ than the temple itself. Hachang Tree, of which we may feel the weight of time by just seeing it, is told that its age is over 350 years and now it is designated as protected tree. Then, we may see Baekwoonbongammun located between Baekwoondae and Mangyengdae and we may reach Baekwoondae after passing this. The scenery watching from Baekwoondae is a great spectacle not to be missed.

On the way down to south from Baekwoondae, we can see ‘Hullyeondogam Yuyoungji‘. Hullyeondogam means military camp taking care of defense for capital of Joseon Dynasty. They stayed here inside the fortress and the buildings are gone while passing Japanese colonial era and now only foundation stone, well and ponds are remaining. Also, near Daedongmun, there is also ‘Igeongibi‘, which is military camp of ‘Geumwiyoung‘ one of Joseon Dynasty‘s central military camps together with ‘Hullyeondogam‘, so it would be meaningful to visit here. Just below Hullyendogam Yuyongji, Nojeoksa Temple, which is one of big 3 temples of Bukhansanseong, shows off its quiet and still appearance. After walking to Nojeoksa Temple along stone way filled with crimson maple in the autumn morning, a great spectacle of morning sunshine on Nojeok Bong will be seen before us.

When you visit Nojeoksa Temple, we recommend you to visit Jungseongmun as well. It is sufficiently beautiful with its arch gatetower filled with vines, and also it is recommendable to the people who like water due to adjacent valley. Especially, the people who like valley should not forget to visit ‘Sanyoungroo‘ meaning ‘the shadow of mountain reflected in the water‘. Sanyoungroo, one of the most beloved places by people visiting Bukhan Mountain, is the place where representative celebrities in Joseon Dynasty such as Choosa Kim Jeong-Hee and Dasan Jeong Yak-Yong visited often. Especially, the grace and dignity after rain is striking, so you may stare it absent-mindedly. Also, beside Sanyoungroo, you may find Bongseongam filled with antique figure, so we recommend you to visit there as well.

Another place especially beloved by climbers who love mountain in winter time is Dongjangdae. Snow-covered Dongjangdae itself is the best art, but the road to Dongjangdae along the snow-covered fortress may let you know the beauty of winter mountain.

When you visited Dongjangdae, it is good to visit Taegosa Temple Wonjeungguksa Pagoda designated as Trasure no. 749. We can find our ancestors‘ excellent sculpture skill and artistic sense from delicate and beautiful lotus flower pattern. To the south part of it, there is temporary palace site during war, so it may be good to take a rest there. We recommend you to visit Buwangsaji before reaching Daedongmun. Remaining stone pillars may be seen lonesome, but the grace and dignity still exist. Also, this is the area where cornlian cherry flower come into bloom firstly in Bukhan Mountain, so the image of Nojeokbong watching from here is worth to take photos.

While walking long course connected from Daeseomun, you may arrive in Daedongmun. You may feel awesome grand differently from beauty of Daeseomun and neat and bijou feeling of Jungmun.

Goyang City watching from the lower part of Baekwoondae

In the southeast part of Daeseomun, our starting point, there is Euisangbong. In Euisangbong, we can watch 20 main mountaintops of Bukhan Mountain. We call the ridge connected from Euisangbong to Yongchul·Jeungchwi·Nahan·Munsubong as ‘Euisangbong ridge‘. In autumn, the autumn leaves seen from left and right while walking this ridge and fortress can be considered as picturesque scenery. Bukhan Mountain is only one national part in capital area and global scenic spot. Bukhan Mountain, harmonized with cultural assets and nature, is Korea‘s representative cultural heritage and the nature‘s repository.