Cultural heritage encountered on the street | Ilsan, The place where tradition and modern times joins Relic in the old stone age for about 50 thousand years ago with historical value as relics in Tanhyeon-dong, the first village in Goyang-si, Tanhyeon-dong When constructing Imgwangjin apartment at Tanhyeon-dong in 2007, 307 reliecs from old stone age were found. In addition, 228 reliecs were found when constructing Daewoo Purgio apartment in 2016. According to the results of analysis by archaeologists, it was revealed that ancestors lived in Tanhyeon-dong from about 60 thousand years to 55 thousand years ago. 52 relics are preserved in national central museum due to high cultural value Among 307 reliecs from old stone age found in Imgwangjin apartment at Tanhyeon-dong, 52 of the highly culturally valuable relics now belong to the nation. This is because they are evaluated to be very outstanding as archeological resources. 72 relics are now preserved in the national central museum as they are valuable for academic research. Geographical characteristics at Tanhyeon-dong as historic site in old stone age There are low foots of mountain at Byukjecheon and Gokreungcheon in the lower bank that people from the prehistoric period used to live in the area due to advantageous environment for living. This place is historically meaningful as a highy dense complex historical site with burial mounds and pit dwellings in the Joseon Dynasty. What was found? Mondol, Jiikgae, Geurge, Homnal, Jumokdaepae, and Gyukji were found as reliecs from the old stone age. 30 pits were found in Daewoo Purgio Apartment as reliecs in the Joseon Dynasty. 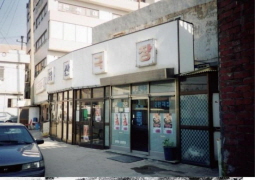 Areas near Ilsan Station in the 1970s

Ilsan Train Station of Gyeongui Line is located at Ilsan-dong, Ilsanseo-gu, in Goyang-si. Gyeonggui line was open in 1906 passing through Sinuiju from Seoul to Gaeseong, Sariwon, and Pyeongyang. Due to the Russia-Japan war in 1904, Japan installed temporary military trail management office to construct the military railway between Seoul and Sinuiju. Japan wanted to use this railway as a path for making invasion that initiated the construction between Yongsan and Gaeseong in March, 1904, and completed it in 1905 that direct operation became available between Yongsan and Sinuiju. As the stone bridge was constructed between Cheongcheon River and Daeryung River in 1906, the entire range was open. Old train station at Ilsan was a building constructed in 1933 that it has a rare historical value for how records of the history during Japanese colonial era is left. It was also evaluated to be well-preserved with original shape and, hence, was designated as a registered cultural asset in 2006. Ilsan station has its architectural mode during the Japanese colonial era left today and is a registered cultural asset showing how it was a hub for commerce in Goyang-area with Ilsan market as well as for the passage for independence fighters. This place was called as Bamgashi straw-roofed village due to many of the Bamgashi trees. In this place, there is a straw-roofed house in unique shape. Located on the foot of north/east foot of Jungbal Mountain, This house shows the structure of traditional house in middle area of Korea as a traditional house in farming village. This is the one and only straw-roofed house preserved while developing the new city in Ilsan in the early 1990s. This is the unique type straw-roofed house that is rare in Korea. This house was named after how there were many Bamgashies in fall from the past. As shown in the name, chestnut was the major source of income in the village from the past and also the major daily supply. Bamgashi straw-roofed house is beautiful when it rains during rainy days, when the moon shines the thatched-roof, and when star light shines the village. 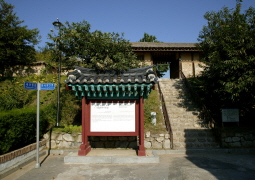 Located at the foot of Jangbal Mountain to the west and north, Bamgashi straw-roofed house was assumed to be built in about 150 according to the degree of abrasion of major parts such as the pillars or structure or the structure of flat surface. Therefore, it is assumed to be a structure before the half of the 19th century. Especially, this house has used chestnut trees for the pillars, girder, middle rooms, door frames, floors, and rafters. This house was built to face the east and south, and the shape of it is ㄱ. Based on the main part of the houe, servants’ quraters that are no longer existant are constructed in symmetry. Therefore, it is in overall ‘ㅁ’ shape. According to the main floored small room in the main building, there are two roomgs, each with the main room and kitchen to the right side and a small room to the left. Bamgashi straw-roofed house has the fence made by chestnut trees, and there is Umgashi tree to prevent bad luck. In summer, it is cool to stay in this house and vice versa for winter. 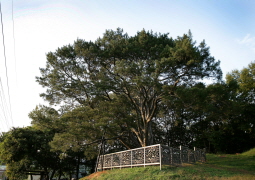 Symbolizing Goyang-si, Songpo Baeksong is 550 years old. It was planted from China during the reign of Sejong in Joseon Dynasty and has been designated as the natural monument. This tree is in white color fromm the body to branches/limbs. This tree features itself with small thorns on the cones. Baeksong becomes white as the wooden bark is peeled off. Therefore, it is called as Baeksong or Baekgolsong. Originated in China, this tree was known to be planted by the general Suwon Choi in the reign of the king Sejong in Joseon Dynasty. This tree has its height of 11.5m and width of 2.39m. When you look at it from the side, trees are seen as a fan in the shape of inverted triangle. Barks are not much whiter compared to other trees. There are two stories of how this tree was originated. One of them says that two of the Baeksong trees were received by the ambassadors from China to the person named Hagyum Yu during Junjo in the Joseon Dynasty (1567-1608), and the tree was presented to the ancestor of Choi. The toher says that the tree was planted by the generao Suwon Choi who worked in the place when Jongsu Kim pioneered six troops during the reign of king Sejong in Joseon Dynasty (1418-1450) on his way back to the hometown. Residents in the village called it as Dangsong as it was originated from China.  Baeksong is a rare pine tree. As a tree showing cultural exchange with China, it is historically and culturally valuable that the tree has been designated as a natural monument. Songpo Baeksong has very thin barks with huge cones (three layers). This is what makes Songpo Baeksong different from other pine trees. The biggest feature of it is that Songpo Baeksong is in white color. 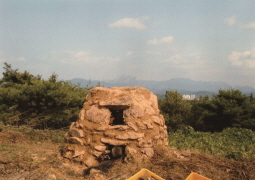 Doksanbongsu is well preserved on top of a hill on the altitude of 133.4m from the sea water level as a boundary of Munbong-dong in Ilsandong-gu, Sarihyeon-dong, and Jiyoung-dong in Goyang-si. The period when Doksanbongsu was established was assumed to be with Bongsuje in the beginning of Koryo or before that according to the record of its name as Bonghwamyeong in [Sejongsilokjiriji]. Doksanbongsu is maintained with consistent shape on the northern line with Sungsan in Paju to the north and Moak->Haepo->Anhyeon to the east. On the other hand, there are many fluctuations to the east. View is spanning through all the directions that it faces Gobongbongsu to the west. It was specifically built considering geographical conditions of stone work Bongsudaero. Donksanbongsu is accessible with vehicle from the three intersection to water reservoir through the Gobong civic center. If you climb up about 5 minutes after parking in front of water reservoir, you can reach Doksanbongsu site that is used as military helicopter area. It is still possible to see the view spanning through the northern area, and stoneworks near Bongdon and Bonghwa are also well-preserved relics in Bongsu. 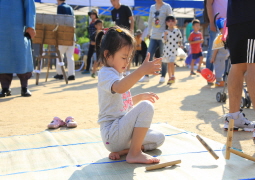 Goyang culture hall is located at 280 Korean New Wave-ro, Ilsanseo-gu. This place has been designated as intangible cultural asset in Gyeonggi-do at Goyang Sangyeohoidajisori serving as a role of Gangpunguje in Haengjunaru, ‘Goyang Folk Museum,’ that was chosen for the business of restoring the traditional art and realization from Ministry of Culture, Sports, and Tourism. Old item exhibition hall at the lobby, Goyang Haegnju Chitadae for representing Korean tradition in various events, juvenile walking guide for guiding people and providing interpretation service in various international events, and Green Doll Act/Children’s Story Clubs that were beloved with historical education are being performed. Goyang Culture Hall making an effort for the culture in Goyang is a hub of traditional culture art in Goyang. Especially, the culture hall building was made as a Korean traditional house that has been frequently shown in TV dramas. 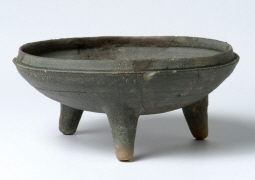 Myukjulsan Mountain is a historical site where was a capital in Baekje that was firstly investigated in Goyang-si. Gyeonggi-do museum has proceeded emergent investigation for identifying the scope and characteristics of the relics in 2003. According to the results of investigation, 8 pit dwellings, 2 pit holes, 1 circular yugu, 5 red stone yugus, and 9 pit halls and 5 private tombs that were made in contemporary era were found. As for artifacts, about 1000 items including gobae, samjokgi, ho, siru, Jangranhyung earthenware, and other earthenware in Baekje, and 25 stone items such as stone arrowhead, stone ceramic, and chulbu were found. Other than those artifacts that were found, there is a high possibility that artifacts are still spread on the entire Myukjulsan Mountain as earthenware is disperse in the entire areas of the mountain. According to many of the relics excavated in each layer and points located in the downstream of Han River, this place is assumed to serve as a place for connection for the exchange between Baekje and China. Relics in Myukjulsan Mountain are of an important value in the Period of Three States for catching how the armed power went down from Goguryo through Han River and defeating them. 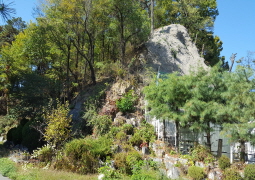 Hub of exchange between Baekje and China, Myukjulsan Mountain

With the history of 1800 years in the past near the areas of Nadeulmok, Isanpo, at Han River, there are relics in Myukjulsan Mountain. Myukjulsan is located near Han River that served as an important path for identifying ships passing through the area. There are many of the relics from Hanseong Baekje found in this place. Other than them, many of the relics from China were excavated that showed the history of exchange of Baekje. In addition, relics in Myukjulsan were relatively recently found (after the 2000s) and, hence, are very important to identify the history of Baekje near the area of Hanju. According to the results of excavation, there is a high possibility to acquire cultural assets related to burial if more relics are to be excavated.