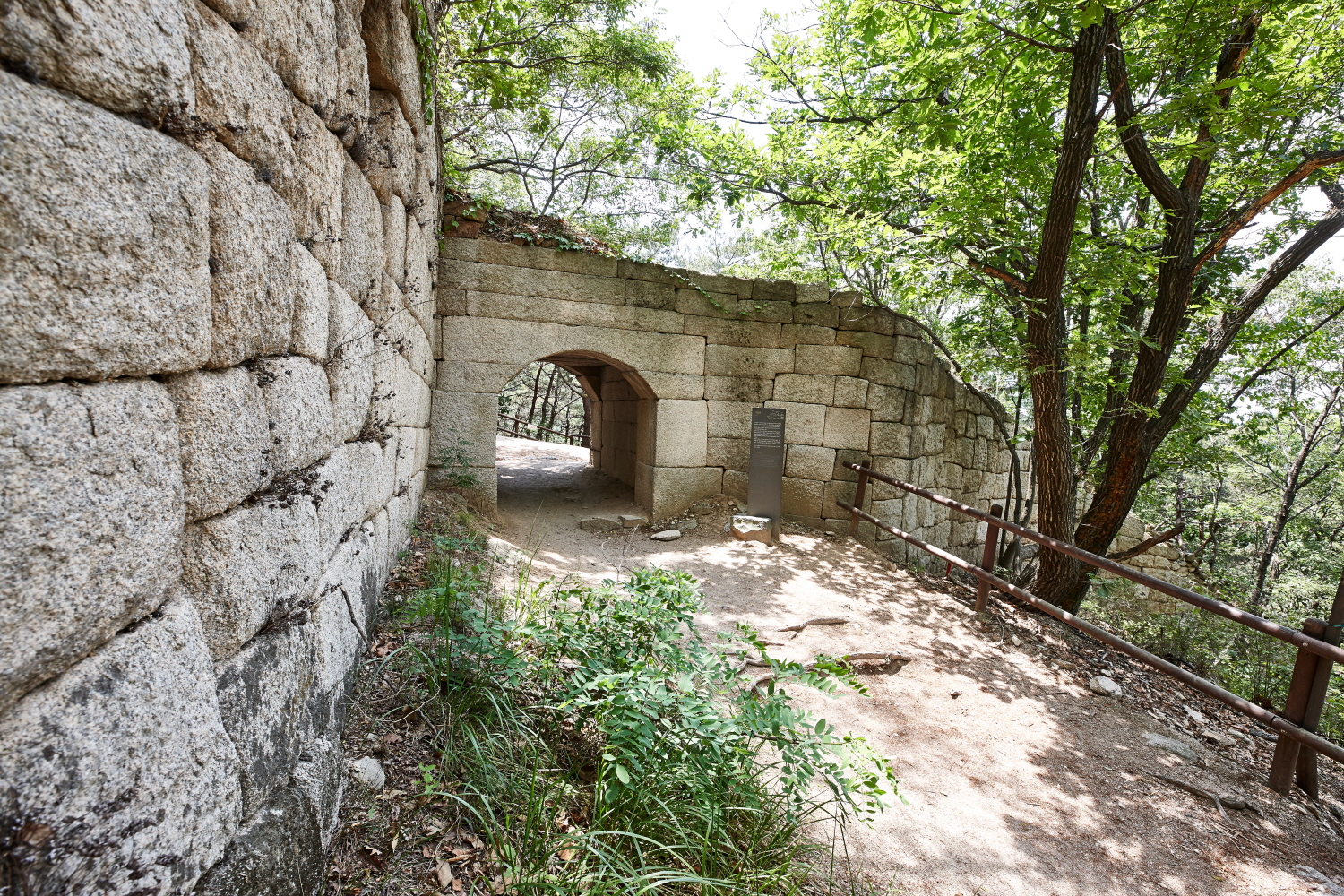 Seoammun is also referred to as Sigumun. In the past, when soldiers or residents died inside fortress, the corpse went through Seoammun instead of Daeseomun. Although this gate has sad name, the road in the gate is so even and quiet and and the place is great for a date. Walk about 10m out of Seoammun toward Hyoja-dong and look back. Then, you will find this hidden gate is different from other hidden gates. While other gates have door on the wall, this hidden gate has ‘tooth’ sticking out of wall. Right after the construction of fortress, Seongho Lee-Ik visited Seoammun and said ‘Other places are rough and the western part is slightly better’. Seoammun has relatively even terrain and the gate has unique shape for protection. When you walk toward Hyoja-dong direction from Seoammun, you will pass Hyojawon Intersection and see Hyoja Police Station bus stop. When you go inside the fortress, you will shortly see Deogam Temple. Amitabha Temple is located under Wonhyobong Peak of Bukhansan Mountain and the administrative district address is 515-19, Bukhan-dong, Deogyang-gu, Goyang-si, Korea. Amitabha Temple belongs to Seonhagwon (Buddhist Academy) of Jogye Order. The history of this temple doesn’t appear in 『Bukhan-ji (Bukhan Map)』. It is only said that Ji-on Park built Daeungjeon Hall by reparing old stone cave in 1966 and built Deogam Temple. Before reparing the stone cave, 3 stone buddhas were inside the stone cave, and 2 gilt gronze Buddha statue and pottery pieces were excavated during flooring work. Therefore, it is assumed that there was a temple in the past. The most notable part of this temple is the Buddhist stone cave sanctuary with the shape of large tortoise. It is said that Saint Wonhyo stayed in the stone cave. The roads in the stone cave are connected to deep inside the cave. Currently, Buddha Triad is enshrined inside the stone cave. On middle, left, and right part of Buddha Triad, you will see Bodhisattva of Wisdom and Samantabhadra which are assumbed to be built in the end of 17th century and they are designated as tangible cultural property in Geyonggi-do. The principal icon of Buddha Triad was enshrined in Anyang Temple in Cheorwon, Gangwon-do. At present, the original icon is enshrined as the main Buddha statue at Hwanhee Temple, Hongjae-dong, Eunpyeong-gu, Seoul. The Maiterya Buddha enshrined in precint of temple was built in 1977 and it stands above octagonal lotus pedestal. On the head of Maiterya Buddha, you will see square type canopy. The Samseong Temple was built in 1980 and portrait of Buddha and Big Dipper, portrait of Pindola-bharadvaja, and portrait of mountain spirit are enshrined in the temple.  In 1987, the natural stone cave under the Maitreya became the hall of Bhaisajyaguru Buddha. Also, in 1988, 3-Story Stone Pagodas was built. In 1994, Beomjong Temple and Buddhist temple bell was arranged. Furthuremore, in 2003, Haseon became chief monk renewed aspects as temple by making pond in front of main Daeungjeon Hall and building monk house. In 1966, Amitabha temple (previously Deogam Temple) was reconstructed by reparing the old stone cave called Turble Stone Cave. The stone cave is assumed to have temple in the past. This cave is used as Daeungjeon Hall(main building of temple) and the cave has height of 3m and area of 83㎡. In the stone cave, Amitabha Buddha Triad is enshrined. On the left and right side of Buddha Triad, you will see Bodhisattava supporting the Triad, Mahasthama-prapta and Avalokitesvara. Those statues are designated and managed as Gyeonggi-do tangile cultural property No.246, wooden seated statue at Deogam Temple. While Daeunjeon Hall utilizes nature, large Maitreya statue made of cement. Although the hall and statue may mismatch each other, the temple as neat impression. 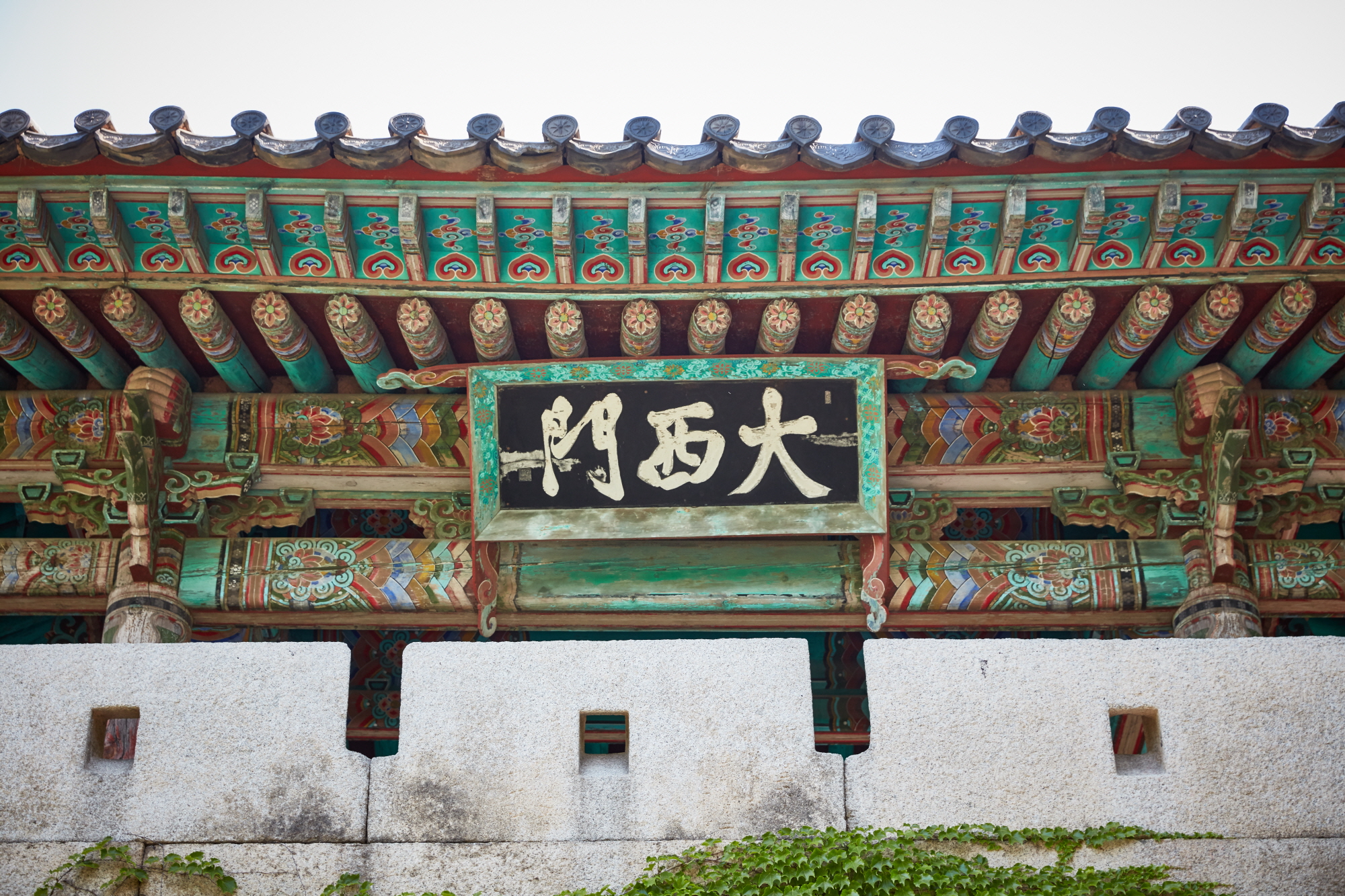 King Sukjong passed Seodaemun Gate, Uiju-daero to enter Daeseomun.  The past record says that surroundings of Daeseomun was very rough. Now a day, however, there are roads inside Daeseomun and it is easy to climb up the mountain with car. In the past, the roads were a narrow path where residents of Bukhansanseong Fortress would use on their way to sell woods. In 1958, the gatehouse of Daeseomun was restored and president Syngman Rhee visited the place. Before the visit of president, govorner of Gyeonggi-do borrowed bulldozer from US base and paved the narrow path into bigger road.  The handwriting on the board of Daeseomun is written by president Syngman Rhee when he visited Daeseomun. Around Daeseomun, there are many apricot trees and persimmon trees. In the past, the residents around Daeseomun planted apricot tress and persimmon trees on the slope that could not be used as the paddy or farm. The fruit trees are densely planted along the slopes until Hachang-Ji. On the way to Hachang-Ji, you will see traces of farm and houses. When you take a close look at the traces of emhankment, wall, and fenses, you will occasionally find cherry trees. It is said that there were a lot of cherry trees when there was a town in the past. It is said that cherry flowers were all over the town during the spring season and the scenery was beautiful even from the distance. The cherry trees, however, are now gone with people and they are rarely seen. 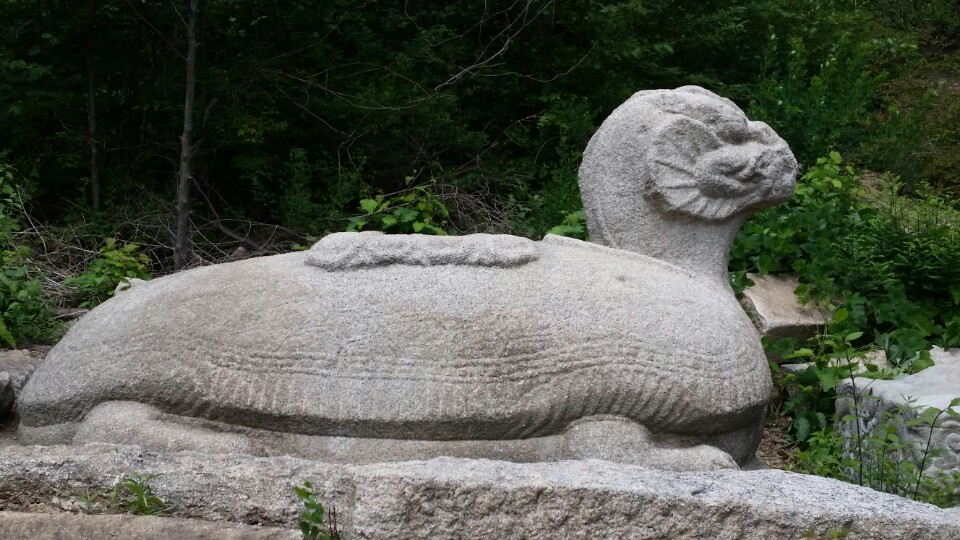 < Goyang Samcheonsaji Daejiguksatapbi (Stone Monument of National Preceptor Daeji) > is a stone monument remaining at historic site of Samcheon Temple, a central temple for Housou Order during Goryeo Dynasty. The stone monument was built to pay a tribute to Daejiguksa Bupkyung(943~1034), a high monk in early Goryeo Dynasty. According to 『Goryeo-Sa (History of Goryeo Dynasty)』, 『Daedong Geum-Suk-Seo (Book of epigraph)』, 『Haedong Geum-Suk-Won(Book of epigraph)』, Daejiguksa Bupkyung become a Buddhist monk at the age of 7 in 949 and became Bhikku at Gaya Temple. His activities in the middle age are not recorded clearly. In old age, however, Daejiguksa Bupkyung stayed at Samcheon Temple as the highest monk. In the age of 78 in 1020, he became the first chief monk at Gaesong Hyunhwa Temple, a religious temple during King Hyeonjong in Goryeo Dynasty. In 1032, Daejiguksa Bupkyung was appointed as the national preceptor at Bongeunsa Temple in the age of 90. In 1034, he passed away at the age of 92 and King Jungjong(1018~1046) gave him the name ‘Daeji’. He was the first Housou Order monk to be appointed as national preceptor in the early Goryeo Dynastly. When you look at the stone monument the tortoise base is carved elaborately on square foundation stone. The neck of the turble is erected straightly facing ahead. The four paws of the turble are expressed realistically and vividely.  Especially, tortoise-shell design located on the back of the tortoise has the letter ‘King’. It indicates that the stone monument was made by the royal family or central government.  Also, the cornerstone in front of tortoise base has long square shape. The sides of cornerstone are decorated with various patterns. At the front and rear side, two dragons stand on the clounds guarding the orb of fire gate. Also, on both sides of cornerstone, tails of dragons and clouds from the front side are expressed beautifully and elegantly. Currently, the body of < Goyang Samcheonsaji Daejiguksatapbi (Stone Monument of National Preceptor Daeji) > is damaged and only tortois base and cornerstone are left. However, the stone monument has high academic value for following points: Preservation in good condition, collection of various monument bodies through several excavation ingestigation, furthur study on Daejiguksa Bupkyung, important data for analysis on Housou Order during early Goryeo Dynasty and monument form supported by loyal family. ※This stone monument is not currently designated as state-designated cultural property Designation Number: Tangible cultural property No.87 Location : 132, Bukhan-dong, Deogyang-gu, Goyang-si Geum-Wei-Young-Yi-Gun-Gi-Bi Monument is located in the site of past Geum-Wei-Young under the Daeseongam Hermitage inside Bukhansanseong Fortress. According to the record, the original Geum-Wei-Young was located inside Sodongmun. However, located in high terrain, Geum-Wei-Young was vulnerable to storm. Thus, it was moved to site under Boguk Temple.  Geum-Wei-Young monument is to commemorate the transfer. The monument is made of granite and back of the monument is buried on the ground. For roof, only the front side of rectangular stone has slope.  At the end of rectangular monument, you will see the inscription written as ‘乙未卽 大明崇楨 甲申後 七十二年也 都提調李餌命 識’. The inscription implies that the monument was built by Dojejo Lee-Myeong Lee in 41th year of King Sukjong (1715) The summary of the inscription is as follows. ‘On April of 37th year of King Sukjong, King Sukjong made his military, Eo-Young-Cheong and Geum-Wei-Young, to reconstruct Bukhansanseong Fortress which was the old fortress built during Baekje Dynasty. King Sukjong also made them to install military camp on the fortress for storing food and for response in emergency. The reparing of the fortress was completed on October of the same year.  Geum-Wei-Young piled 2,821 stones from southeast of Neungam to Bohyeonbong Peak. Also, there were 1,065 farms and two gates (Daeseongmun, Sodongmun) and castle was built on the gate. Geum-Wei-Young also constructed Jangde (commanding building),rooms and fortress. Furthurmore, four temples other than Taegosa Temple were inside the forthress. On March, Geum-Wei-Young moved barracks and 90 warehouses to Boguk Temple, one of the four temples. It is also said that the construction was completed in August 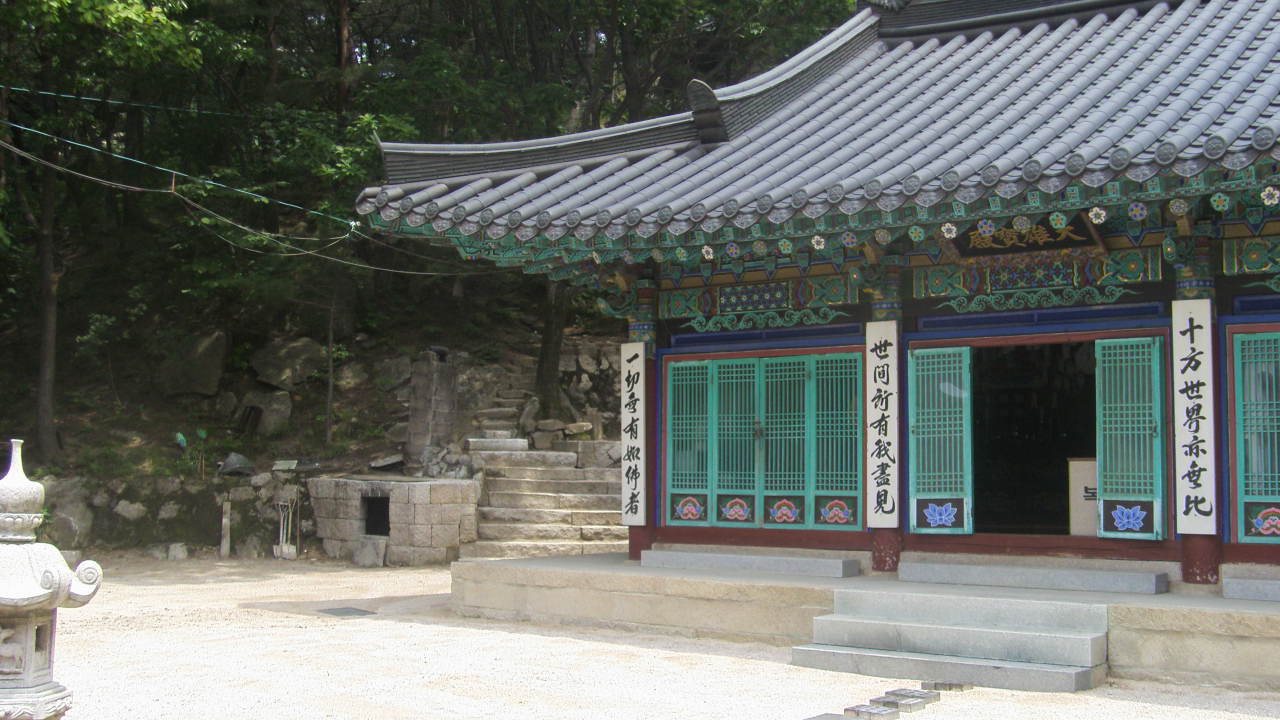 Location : Mountain 15, Bukhan-dong, Deogyang-gu, Goyang-si Taegosa Temple is on the peak located on left side of Jungheung Temple under Taegodae in Bukhan-dong. Taegosa Temple was established by high monk during Goryeo Dynasty, Won-Jeung Guksa in late 14th century. However, after the collapse of Goryeo, the temple was almost ruined. Then, in 39th year of King Sukjong, 19th king of Joseon Dynasty, Sungneung restored and established Taegosa Temple again while constructing Bukhansanseong Fortress Taegosa Temple, however, was ruined during the Korean War and only Won-Jeung-Guk-Sa-Tap of Taegosa Temple and stone monument remain. The founder of Taego Temple, Won-Jeung Guksa, was a high monk during the late Goryeo Dynasty and he was either referred to as Taego or Bowoo His last name was Hong and his family originated from Hongju. He was born in Yangeun during the 27th year of King Chungnyeol (2301). At the age of 13, he studied in Hoeamsa Temple Laster, he built temple on Jungheung Temple in Bukhansan Mountain and named the temple Taegosa Temple. Inside the temple, Won-Jeung-Guk-Sa-Tap-Bi and Sansingak stand on the left and right of Daeungjeon Hall and Won-Jeung-Guk-Sa-Tap and Yosachae are upper and lower sides of Daeunjeon Hall. Won-Jeung-Guk-Sa-Tap is a stupa of Bowoo and it is a three-story stone pagoda made of granite. It was designated as National Treasure No.749 on On December 27, 1983.